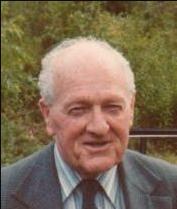 Hedley Percival Bunton was a missionary in China and a Minister in the Congregational Church in Australia. He was known in China as Poon Dun Muk Si.