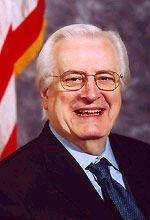 Henry John Hyde (April 18, 1924 – November 29, 2007), an American politician, was a Republican member of the United States House of Representatives from 1975 to 2007, representing the 6th District of Illinois, an area of Chicago's northwestern suburbs which included O'Hare International Airport. He chaired the Judiciary Committee from 1995 to 2001, and the House International Relations Committee from 2001 to 2007. He gained national attention for his leadership role in managing the impeachment trial of President Bill Clinton.