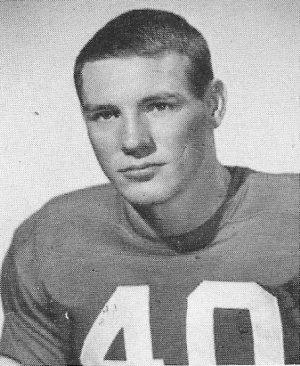 Howard Albert "Hopalong" Cassady (born March 2, 1934) is a former college and professional American football running back. He was the Heisman Trophy winner of 1955 and was inducted into the College Football Hall of Fame in 1979.
Cassady played nine seasons in the National Football League: seven for the Detroit Lions, and one each for the Cleveland Browns and the Philadelphia Eagles. In the NFL he was an all-purpose back, playing both receiver and running back and scoring 27 career touchdowns.

After retiring from football, Cassady became an entrepreneur forming a company manufacturing concrete pipe. He then served as a scout for the New York Yankees baseball team, and as the first base coach for their former AAA affiliate, the Columbus Clippers.
His son Craig Cassady played defensive back at Ohio State, and briefly in the NFL for the New Orleans Saints in the 1970s. Cassady died on September 20, 2019 at his home in Tampa, Florida.