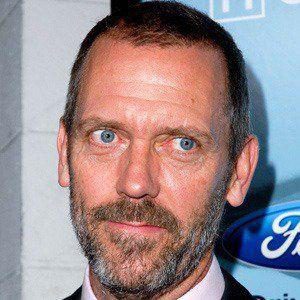 James is alive and kicking and is currently 62 years old.
Please ignore rumors and hoaxes.
If you have any unfortunate news that this page should be update with, please let us know using this .

Does Hugh Laurie Have the coronavirus?

Actor, comedian, and accomplished musician, Hugh Laurie was born on June 11, 1959, in Oxford, England. He skyrocketed to fame in the United States playing the brilliant but rude and arrogant Dr. Gregory House in the TV drama House.
Laurie married theatre administrator Jo Green on 16 June 1989 in Camden, London. They live in Belsize Park, London, with sons Charles (born 1988) and William (born 1991) and daughter Rebecca (born 1993). In July 2008, Laurie bought a mansion in Hollywood, California, as they had planned to move the whole family there because of the strain of being mostly separated for nine months each year while Laurie filmed House, but ultimately decided against it. When he bought the mansion, he claimed he was in "virtual isolation" from his family.

In March 2012, Laurie was made an Honorary Fellow of his alma mater Selwyn College, Cambridge. In June 2013, he was the guest on BBC Radio 4's Desert Island Discs when he chose Joe Cocker, Sister Rosetta Tharpe, Randy Newman, Professor Longhair, Son House, Nina Simone, Lester Young–Buddy Rich Trio, and Van Morrison as his eight favourite discs. This was his second appearance on the show, having previously been a "castaway" in 1996, when he chose tracks by Muddy Waters, Max Bruch, the Rolling Stones, Frank Sinatra with Count Basie, Ian Dury and the Blockheads, Erich Wolfgang Korngold, and Van Morrison. In October 2016 he was awarded a star on the Hollywood Walk of Fame. Laurie was advanced to a Commander of the Order of the British Empire (CBE) for his services to drama in the 2018 New Year Honours.