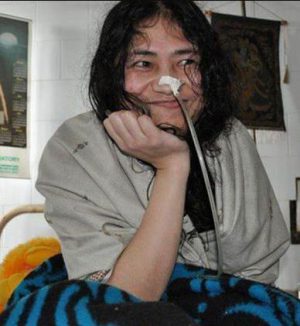 Irom is alive and kicking and is currently 50 years old.
Please ignore rumors and hoaxes.
If you have any unfortunate news that this page should be update with, please let us know using this .

Irom Chanu Sharmila (born 14 March 1972), also known as the "Iron Lady of Manipur" or "Mengoubi" ("the fair one") is a civil rights activist, political activist, and poet from the Indian state of Manipur. On 2 November 2000, she began a hunger strike which is still ongoing. Having refused food and water for more than 500 weeks, she has been called "the world's longest hunger striker". On International Women’s Day, 2014 she was voted the top woman icon of India by MSN Poll.