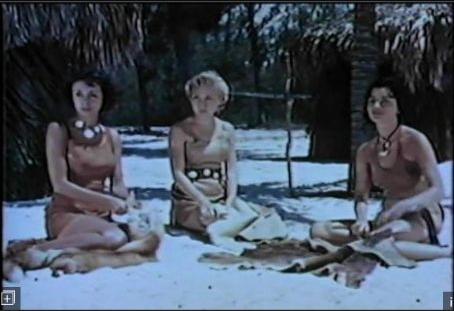 Jo Elaine Wagner is an actress, known for The Wild Women of Wongo (1958). The Wild Women of Wongo is a 1958 American film directed by James L. Wolcott, featuring low budget, stereotypical portrayals of fictional tropical islanders. The movie was released on DVD in 2004.
The film starts with narration from Mother Nature discussing an experiment with Father Time that went wrong. On the (fictional) island of Wongo she created a tribe where the men are brutish and ugly and the women are beautiful. She then creates a tribe on a nearby island called Goona where the women are repulsive and the men are strong and handsome. The film concludes with all the beautiful men and women married, and the ugly men with the ugly women.

Little is know of Jo Elaine’s life outside of her appearance in WILD WOMEN OF WONGO. She graduated from Hialeah High in 1958, her nickname was “Pekinses,” and she worked as a model in Miami for a time. She married at least twice and was also known as Jo Elaine Reynolds circa 1968.