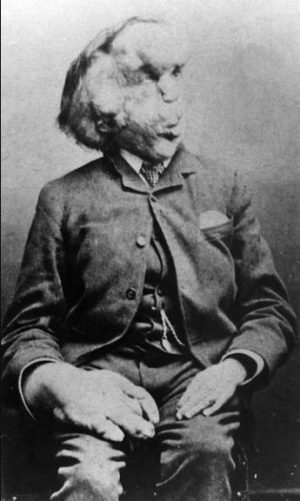 Joseph Carey Merrick, sometimes named incorrectly as John Merrick, was an Englishman with severe deformities who was exhibited as a human curiosity named the Elephant Man. He became well known in London society after he went to live at the London Hospital. Merrick was born in Leicester, and began to develop abnormally during the first few years of his life. His skin appeared thick and lumpy, he developed enlarged lips, and a bony lump grew on his forehead. One of his arms and both of his feet became enlarged and at some point during his childhood he fell and damaged his hip, resulting in permanent lameness. When he was 11, his mother died, and his father soon remarried. Merrick left school at the age of 13 and had difficulty finding employment. Rejected by his father and stepmother, he left home. In late 1879, Merrick, aged 17, entered the Leicester Union Workhouse.