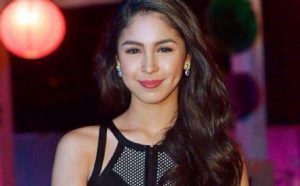 Julia is alive and kicking and is currently 25 years old.
Please ignore rumors and hoaxes.
If you have any unfortunate news that this page should be update with, please let us know using this .

Does Julia Barretto Have the coronavirus?

Julia Barretto's father, Dennis Padilla, is still alive and kicking at the age of 60. He is Filipino and has had a career as a actor, comedian, radio broadcaster, politician.

Julia Barretto's mother, Marjorie Barretto, is still alive and kicking at the age of 48. She is Filipino and has had a career as a actress, politician.

Julia Francesca Barretto Baldivia is a Filipino actress. She is a talent of ABS-CBN and Star Magic.
She was born on March 10, 1997 in Marikina to actors Dennis Padilla and Marjorie Barretto. She has two siblings, Claudia and Leon, an older maternal half-sister, Dani and a younger maternal half-sister, Erich. She finished grade school (Grades 1 to 7) at Miriam College in Loyola Heights Katipunan Avenue Quezon City in March 2011 and graduated from high school at St. Paul College in Molave Pasig in March 2015.

She rose to prominence after being cast in ABS-CBN's Kokey, where she played the lead role of Anna Calugdan. She has successfully starred as the protagonist of the 2014 melodrama fantasy series Mirabella. She also starred as a bida kontrabida (Villain) in And I Love You So. She's one of the Asap It Girls together with Liza Soberano, Janella Salvador and Kathryn Bernardo.