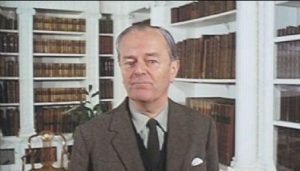 Kenneth McKenzie Clark, Baron Clark OM CH KCB FBA (13 July 1903 – 21 May 1983) was a British author, museum director, broadcaster, and one of the best-known art historians and aesthetes of his generation, writing a series of books that appealed to a wide public while remaining a serious scholar. In 1969, he achieved international fame as the writer, producer and presenter of the BBC Television series Civilisation, which pioneered television documentary series combining expert personalized narration with lavish photography on location.