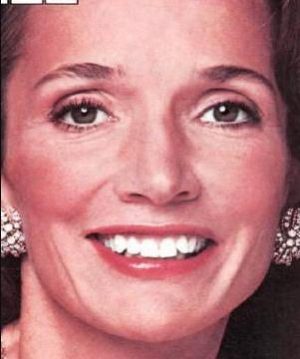 Caroline Lee Bouvier is an American socialite, public relations executive, interior decorator, and former actress. She is the younger sister of the late First Lady, Jacqueline Kennedy Onassis, and sister-in-law of President John F. Kennedy. Her niece Caroline Bouvier Kennedy is named after her. She was named to the International Best Dressed List Hall of Fame in 1996.
Radziwiłł was married three times. Her first marriage, in April 1953, was to Michael Temple Canfield, a publishing executive. They divorced in 1959, and the marriage was annulled by the Roman Catholic Church in November 1962.

Her second marriage, on March 19, 1959, was to the Polish aristocrat Prince Stanisław Albrecht Radziwiłł, who divorced his second wife, the former Grace Maria Kolin, and received a Roman Catholic annulment of his first marriage to re-marry (his second marriage had never been acknowledged by the Roman Catholic Church, so no annulment was necessary). Upon her marriage she became Her Serene Highness Princess Stanisław Albrecht Radziwiłł. They had two children, Prince Anthony (1959-1999) and Princess Christina. Their marriage ended in divorce in 1974.
On September 23, 1988, Radziwiłł became the second wife of American film director and choreographer Herbert Ross. They divorced shortly before his death, and she returned to using Radziwiłł, her children's name.