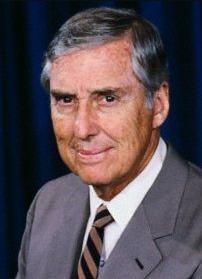 Lloyd Millard Bentsen, Jr. (February 11, 1921 – May 23, 2006) was an American politician who was a four-term United States Senator (1971–1993) from Texas and the Democratic Party nominee for vice president in 1988 on the Michael Dukakis ticket. He also served in the House of Representatives from 1948 to 1955. In his later political life, he was Chairman of the Senate Finance Committee and the U.S. Treasury Secretary during the first two years of the Clinton administration.