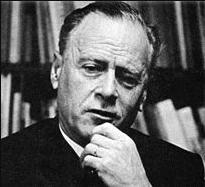 Herbert Marshall McLuhan, CC (July 21, 1911 – December 31, 1980) was a Canadian professor of English, philosopher of communication theory and a public intellectual. His work is viewed as one of the cornerstones of the study of media theory, as well as having practical applications in the advertising and television industries. He was educated at the University of Manitoba and Cambridge University and began his teaching career as a Professor of English at several universities in the U.S. and Canada, before moving to the University of Toronto where he would remain for the rest of his life.