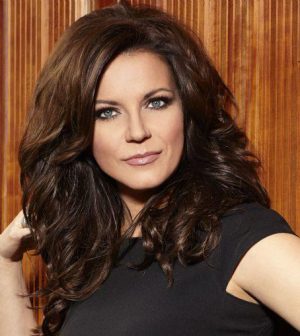 Martina is alive and kicking and is currently 55 years old.
Please ignore rumors and hoaxes.
If you have any unfortunate news that this page should be update with, please let us know using this .

Does Martina McBride Have the coronavirus?

Martina Mariea Schiff, known professionally as Martina McBride, is an American country music singer, songwriter, and record producer. She is known for her soprano singing range and her country pop material.
McBride released her debut studio album by RCA Records in 1992, titled The Time Has Come. It was produced by Paul Worley and Ed Seay. This album's title track made number 23 on the country music charts, but the next two singles both failed to make top 40. Unlike her later country pop-influenced albums, The Time Has Come featured honky tonk and country folk influences.

McBride's sixth studio album, Emotion, was released in 1999. Its lead single, "I Love You," reached number one on the Billboard country charts in 1999, and also crossed over to the Adult Contemporary chart. The song's follow-ups, "Love's the Only House" and "There You Are", both made top ten at country radio, and "It's My Time" peaked at number eleven.
In 2001, she released her first compilation, Greatest Hits. This album has been certified 3× Platinum in sales by the Recording Industry Association of America, and is her highest-selling album. It included most of her major hits to that point, and the album track "Strangers" from the album The Way That I Am, which she put on the album because she felt that it should have been a single. The album also included four new songs, all of which made top ten on the country music charts between 2001 and 2003: "When God-Fearin' Women Get the Blues", "Blessed" (her fifth number one), "Where Would You Be", and "Concrete Angel". Carolyn Dawn Johnson sang backing vocals on "Blessed"; conversely, McBride sang backing vocals on Johnson's late-2000 debut single, titled "Georgia". Late in 2002, McBride also sang backing vocals on Andy Griggs's single "Practice Life".
In 1988, McBride married sound engineer John McBride and the couple have three daughters: Delaney Katharine (born December 22, 1994), Emma Justine (born March 29, 1998) and Ava Rose Kathleen (born June 20, 2005). After becoming a mother, the singer reduced her touring schedule so that her daughters could have a normal upbringing. Joe Galante said this was “an enormous choice in terms of money,” but McBride had made it very clear that she wanted to be present in her daughters’ lives.