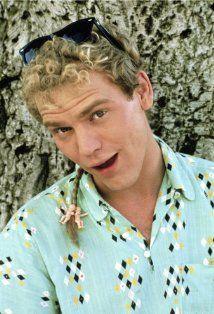 Merritt passed away on March 17, 1989 at the age of 29 in Los Angeles, California, USA. Merritt's cause of death was aids (related toxoplasmosis).

Merritt R. Butrick (September 3, 1959 – March 17, 1989) was an American actor, known for his roles on the 1982 teen sitcom Square Pegs, in two Star Trek feature films, and a variety of other acting roles in the 1980s.
He was cast as John "Johnny Slash" Ulasewicz, a major supporting character in the teen sitcom Square Pegs (1982), which received critical praise but was cancelled after 19 episodes (one season). The character was described by one critic as an "apparent (but never declared) gay student."

He received critical praise from Time magazine for his performance at the Los Angeles Theatre Center in the play Kingfish, in which he played a ditzy, petulant muscle-boy prostitute. It was his last acting role.
Butrick died of toxoplasmosis, complicated by AIDS, on March 17, 1989, at the age of 29. He has at least two panels dedicated to him as part of the NAMES Project AIDS Memorial Quilt, both referencing his role as David Marcus.
Some sources state that Butrick was gay. Kirstie Alley, his co-star in Star Trek II, identified Butrick as being bisexual.