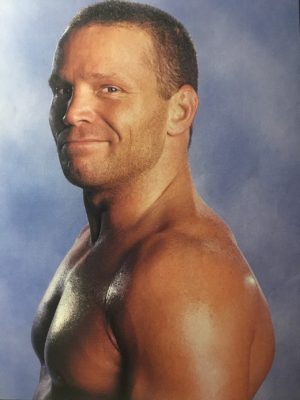 Michael passed away on November 6, 2003 at the age of 32 in Navarre, Florida. Michael's cause of death was choking.

Michael John Lockwood (August 25, 1971 – November 6, 2003) was an American professional wrestler. He was best known for his appearances with the World Wrestling Federation/World Wrestling Entertainment from 1999 to 2003 under the ring names Crash Holly or simply Crash.
Lockwood was born in Anaheim, California, and raised in Pacifica, California, where he graduated from Terra Nova High School. He became interested in professional wrestling in the eighth grade, inspired by Brady Boone. While training as a wrestler and working on the independent circuit, he worked a second job at Safeway.

Lockwood met his wife, N'keigh Wheeler, when she escorted Mark Henry to the ring at Unforgiven 1999, in Charlotte, North Carolina. They married on New Year's Eve, 1999. In 2002, he opened "Crash Holly's School of Professional Wrestling" in Salisbury, North Carolina, where N'keigh grew up.
Lockwood died on November 6, 2003, at his friend and fellow wrestler Stevie Richards' house in Florida. He was found partially clothed with a pool of vomit around his face. Empty bottles of the prescription drug carisoprodol and a partially consumed bottle of alcohol were found nearby. He had recently received divorce papers from his wife. His death, caused by choking on his own vomit, was officially ruled a suicide. He was buried in China Grove in Rowan County, North Carolina.
In August 2005, Nora Greenwald, who performed alongside Lockwood as Molly Holly, released an autobiographical DVD titled "Nora Greenwald: Shootin' the Shi Crap", and a portion of the profits from the sale of the DVD went to Lockwood's daughter's education fund. In March 2005, the New Breed Wrestling Association held the "Mike Lockwood Memorial Tournament", which was won by Michael Modest. At ECW One Night Stand in 2005, Lockwood was one of the deceased former ECW wrestlers honored in a video package.