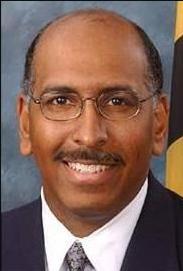 Michael is alive and kicking and is currently 63 years old.
Please ignore rumors and hoaxes.
If you have any unfortunate news that this page should be update with, please let us know using this .

Does Michael Steele Have the coronavirus?

Michael Steele's father, John Turner, is still alive and kicking at the age of 89.

Michael Stephen Steele is an American politician and MSNBC political analyst as of May 2011. Steele served as the first African-American chairman of the Republican National Committee from January 2009 until January 2011. From 2003 to 2007, he was the seventh Lieutenant Governor of Maryland, the first African American elected to statewide office in Maryland. During his time as Lieutenant Governor, he chaired the Minority Business Enterprise taskforce, actively promoting an expansion of affirmative action in the corporate world.