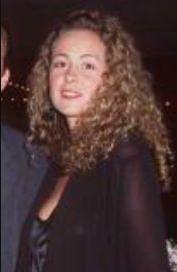 Minnie is alive and kicking and is currently 52 years old.
Please ignore rumors and hoaxes.
If you have any unfortunate news that this page should be update with, please let us know using this .

Does Minnie Sharp Have the coronavirus?

Minnie Sharp is an American model who was born on April 14, 1969. She was Luke Perry's wife from 1993 to 2003. Rachel and Luke had two children together. Their oldest son, Jack, 21, is now a professional wrestler who goes by the name, “Jungle Boy” Nate Coy. Their daughter, Sophie, is now 18.
She and Luke had a small, private wedding. Only 50 guests attended, including family and some of Luke’s Beverly Hills, 90210 castmates. The reception took place at Pinot Bistro in the San Fernando Valley, and after the festivities were over, the then couple went to LAX to take a plane to their undisclosed honeymoon destination.

There were rumors that she met Luke after sending him lingerie as a fan. Tabloids insisted Rachel, who is not involved in show business, got the hunk’s attention by sending him the sexy pieces in the mail, but Luke never confirmed this, and said they met in a restaurant. “It’s that simple,” he said, according to People. After dating for two years, they married in 1993 and got divorced 10 years later, in 2003.
She dabbled in acting at one point in her life. Rachel appeared in the film Teen Wolf 2 but didn’t go on to pursue it as a career. She does have some family history in the movies, though. Her father, Alan Sharp, wrote the screenplay for the 1983 film, Living Dangerously, starring Mel Gibson and Sigourney Weaver. Her half-sister, Ruth Emmanuella Davies, was also an actress for a brief time.