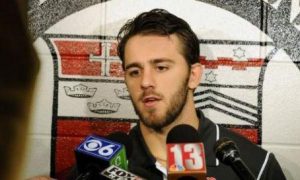 Nick is alive and kicking and is currently 32 years old.
Please ignore rumors and hoaxes.
If you have any unfortunate news that this page should be update with, please let us know using this .

Nick Bailen (born December 12, 1989) is an American-Belarusian ice hockey defensemen who is currently playing for HC Dinamo Minsk of the Kontinental Hockey League (KHL). He used to play for RPI Engineers men's ice hockey of ECAC Hockey, a NCAA Men's Division I Ice Hockey conference that compete in NCAA Division I ice hockey. On December 1, 2014 he received Belarusian citizenship. In accordance with IIHF rules on nationality, Bailen would then be eligible to join the Belarusian national team for the 2016 IIHF World Championship.