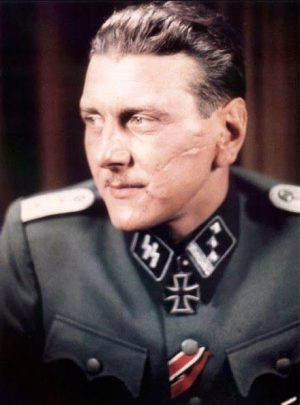 Otto Skorzeny (12 June 1908 – 5 July 1975) was an Austrian SS-Obersturmbannführer (lieutenant colonel) in the German Waffen-SS during World War II. After fighting on the Eastern Front, he accompanied the rescue mission that freed the deposed Italian dictator Benito Mussolini from captivity. Books and papers written about him prior to the 2013 release of records pursuant to the Nazi War Crimes Declassification Act incorrectly refer to him as "Field Commander" of the operation. Skorzeny was the leader of Operation Greif, in which German soldiers were to infiltrate through enemy lines, using their opponents' languages, uniforms, and customs. At the end of the war, Skorzeny was involved with the Werwolf guerrilla movement.