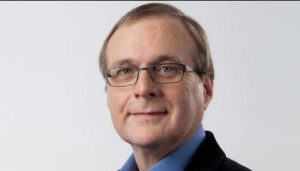 Paul Gardner Allen (born January 21, 1953) is an American philanthropist, investor, musician, and innovator, best known as the co-founder of Microsoft alongside Bill Gates. As of July 2015, he was estimated to be the 51st richest person in the world, with an estimated wealth of $18.1 billion.
In 2014, Allen pledged at least $100 million toward the fight to end the Ebola virus epidemic in West Africa, making him the largest private donor in the Ebola crisis. He also created a website called TackleEbola.org as a way to spread awareness as well as serve as a way donors could fund projects in need. The site additionally highlighted organizations working to stop Ebola that Allen supported such as International Red Cross and Red Crescent Movement, Médecins Sans Frontières, Partners in Health, UNICEF and World Food Program USA. On April 21, 2015, Allen brought together key leaders in the Ebola fight at the Ebola Innovation Summit in San Francisco. The summit aimed to share key learnings and reinforce the need for continued action and support to bring the number of Ebola cases down to zero, which was achieved in January 2016.

While Allen expressed interest in romantic love and one day having a family, he never married and had no children. His marriage plans, with his first girlfriend Rita, were cancelled as he felt he "was not ready to marry at 23". He was sometimes considered reclusive.
Allen was diagnosed with Stage 1-A Hodgkin's lymphoma in 1982. His cancer was successfully treated by several months of radiation therapy. Allen was diagnosed with non-Hodgkin lymphoma in 2009. Likewise, the cancer was successfully treated until it returned in 2018, which ultimately caused his death by septic shock on October 15, 2018. He was 65 years old.

Tags: American Born in 1953 Co-founder of microsoft chairman of vulcan inc. Died in 2018