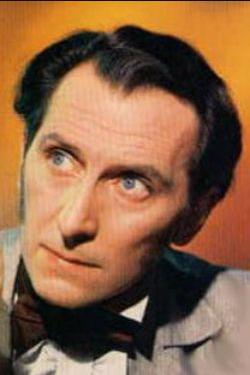 Peter passed away on August 11, 1994 at the age of 81 in Canterbury, England. Peter's cause of death was cancer - prostate.

Peter Cushing Actor - Imperious, intellectual-looking British actor Peter Cushing studied for a theatrical career under the guidance of Cairns James at the Guildhall School of Music and Drama. Cushing supported himself as a clerk in a surveyor's office before making his first professional stage appearance in 1935. Four years later, he came to America, where he was featured in a handful of Broadway plays and Hollywood feature films. He had a small part in The Man in the Iron Mask and also doubled for Louis Hayward in the "twin" scenes; he was among the rather overaged students in Laurel and Hardy's A Chump at Oxford; and he was second male lead in the Carole Lombard vehicle Vigil in the Night. After closing out his Hollywood tenure with They Dare Not Love (1941), he returned to stage work in England. His next film appearance was as Osric in Laurence Olivier's Hamlet (1948), which also featured his future co-star Christopher Lee in a nonspeaking bit (Cushing and Lee's paths would cross again cinematically in Moulin Rouge , though, as in Hamlet, they shared no scenes).In the early '50s, Cushing became a TV star by virtue of his performance in the BBC production of George Orwell's 1984. Still, film stardom would elude him until 1957, when he was cast as Baron Frankenstein in Hammer Films' The Curse of Frankenstein. It was the first of 19 appearances under the Hammer banner; Cushing went on to play Van Helsing in Horror of Dracula (1958) and Sherlock Holmes in The Hound of the Baskervilles (1959), roles which, like Baron Frankenstein, he would repeat time and again. Though his horror film appearances brought him fame and fortune, Cushing ruefully commented that he'd prefer not to be so tightly typecast: It is significant that his entry in the British publication Who's Who in the Theatre lists all of his theatrical credits, but only one title -- Hamlet -- in his film manifest. In 1975, after a decade's absence, Cushing made a return to the theater in Washington Square, ironically playing the role originated on Broadway by fellow Sherlock Holmes interpreter Basil Rathbone. Many of Cushing's later film assignments were in the tongue-in-cheek category, notably his sneeringly evil Governor Tarkin in Star Wars (1977) and his backwards-talking librarian in Top Secret! (1984). Retiring from the screen in 1986, Peter Cushing penned two volumes of memoirs: An Autobiography (1986) and Past Forgetting (1988).