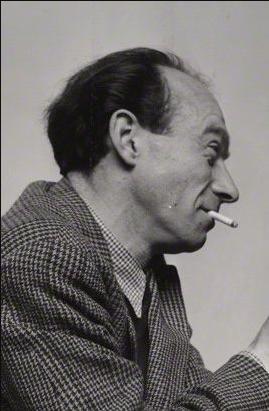 In 1962, there was an extended correspondence between the then Director of the National Portrait Gallery, Kingsley Adams, and various official bodies in Britain and the United States attempting to discover the identity and whereabouts of a sculptor called Peter Lambda. It was not until 1973 that the gallery, in pursuit of a portrait of Aneurin Bevan, finally caught up with Lambda; and even today, when millions have since walked by his striking portrait bronzes in the gallery and have watched some of the many television drama series scripted by him, his name still remains undeservedly unknown.For this, Lambda's own modesty must in part be held responsible, but, like many other talented young refugees arriving in London in 1938, he found his career diverted into other channels by the Second World War and he was soon moving easily between sculpture and his other great loves, writing and the theatre.He was born in Budapest in 1911: his father was a doctor and his mother a psychoanalyst, a pupil of Sigmund Freud.Largely educated in Vienna (and thus bilingual), Lambda studied medicine before training as a sculptor, spending time in both Paris and Prague. By 1938, he had apparently achieved some success in his native Budapest as a sculptor of portraits and of the figure and small-scale caricatures, and he must have made a fairly abrupt decision to leave Hungary after a one-man show at the Tamas Gallery in May of that year.During the war, Lambda worked for the Crown Film Unit and wrote propaganda scripts for the BBC. Finding time for sculpture when he could, he executed a quick sketch in clay of the Secretary of State for Air, Sir Kingsley Wood, in the minister's office in 1939 (there is a cast of this in the National Portrait Gallery's collection) and a meeting with Nye Bevan in 1945 paved the way for what is perhaps one of Lambda's most successful portrait heads. Commissioned for the Working Men's Institute in Bevan's native Tredegar, the truculent over-life-size head attracted some attention when it was exhibited at the Arcade Gallery and the original bronze is now on loan to University College, Swansea. Casts were later made for the National Museum of Wales and for the National Portrait Gallery.After the war, Lambda worked briefly in industrial design for ICI on their new material, perspex, even creating several sculptures from it, but it was at about this time that he began to make strides in the world of the theatre. He seems to have been taken up by Lena Ashwell and after sculpting her portrait found employment among many of the leading figures of post-war British theatre: Claire Bloom, Dorothy Dickson, Christopher Fry, Lesley Banks, Terence Rattigan and Wendy Hiller all sat to him.In 1951 he went to stay with the Oliviers at Notley Abbey, in Buckinghamshire, in order to sculpt Vivien Leigh, but following displays of temperament on her part came away instead with a monumental bust of the young Olivier which was first cast in 1982 for the National Portrait Gallery. Lambda exhibited twice at the Royal Academy, the first time in 1952 with a nude figure of the actress Linda Christian which attracted considerable attention in the popular press.Hand-in-hand with the sculpture, Lambda also began to develop his writing for the theatre. He wrote plays which were at least performed and his translations brought a number of central European works to the British public. In 1958 he married the actress Betty Paul and, though both had previously been married (he to a Hungarian ballet dancer from whom he split up soon after arriving in Britain), the marriage was an extremely happy and fruitful one. Together they collaborated on plays and increasingly on scripts for the rapidly growing television industry, writing for series such as Probation Officer and their own series for Anglia, Weaver's Green (1964). Lambda also had some success with works for children including Sunday's Child and with plays and film scripts in German, and he continued writing up until 1993.Lambda executed his last portrait bust, of the actress Liz Robertson, in 1981. Increasing trouble with his eyesight made the process too painful, and he and Betty left London in 1987 for the Gloucestershire village of Tibberton. He had continued to sculpt portraits of children privately, but there is a sense that his sculpture had early on lost out to his writing career and he never seemed to regain the creative flurry which produced the theatrical portraits of the early 1950s.Among a handful of some of the most forceful portrait heads of the time, the best are undoubtedly those of Aneurin Bevan (1945) and Christopher Fry (1951) which, with their vigour and physicality, stand out among the relatively sober bronzes in the post-war galleries of the National Portrait Gallery.With so much of his work unseen, some in Hungary, some uncast and other pieces scattered amongst private collections, it may well be too early to make a final assessment of Peter Lambda's achievement.Robin GibsonPeter Lambda, sculptor and writer: born Budapest 12 February 1911; married secondly 1958 Betty Paul; died Tibberton, Gloucestershire 14 July 1995.