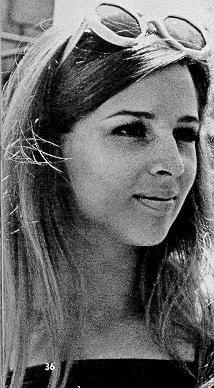 Phyllis Ann Barbour was born in 1946 in New York City, to a military family. During her childhood, she lived in Texas (three separate times!), Los Angeles, and Germany. Phyllis may have moved a lot, but her childhood was relatively stable, thanks to the close bond between Phyllis and her family, which included a brother, Bruce (who would later pose as Mike`s stand-in on "The Monkees"), another brother named Christopher, and a sister named Joan.She was put in an accelerated program in grade school, so by the time she was 16, she was enrolled in San Antonio Junior College, where she majored in English and Journalism. At San Antonio College, she caught the eye of an older guy; a tall, dark, and handsome guy named Mike Nesmith. Mike was in love with Phyllis the very first time he met her. He explains: "When I met Phyllis I had a feeling that I had never experienced before and I was so sure she was the girl for me I asked her to marry me before I ever asked her for a date." Unfortuantely for Mike, Phyllis was already seeing some dude named Mark. Apparently, the first time Mike and Phyllis met, the first thing he said to her was "Nine is brown," and Phyllis answered "Three is blue." Which makes absolutely no sense to me. I guess they`re too deep. Anyway, they were introduced by David Price and eventually began seeing eachother on the down low. Obviously she had to break up with Mark for Mike. Who wouldn`t? Phyllis found out she was pregnant and so of course, she and Mike had to get married. They were married on March 16, 1963; He was 20, she was 17.On being married, Mike said in 1968; "Since I`ve been married I have been a complete person. Before I think I was a half person. Phyllis now makes up my other half and makes me whole." On January 31, 1964, Mike and Phyllis had their first son, Christian DuVal Nesmith.Mike got bored of Texas, and of college, and in 1964, he, Phyllis, and John London packed up and moved to Los Angeles. They were living off of hardly any money while Mike and John were working as a folksinging duo, and MCing at the Troubador. Finally, in late 1965, Mike`s luck began to change when he got cast as one of the leads on a new NBC series called "The Monkees". Phyllis took his newfound fame in stride; "I was along for the ride. I happened to be married to someone who was in that position. I think it was very tough...I think it was hard to have a normal life and maintain some stable values. You have a loss of privacy and a distortion of personal identity."By 1967, Mike and Phyllis were millionaires and they truly indulged in their newfound wealth. Mike and Phyllis are devoted Christian Scientists, and they believed that if you desire material things and you get them, then they become less important. Phyllis reflects back on the money and fame; "Naturally there was some interesting byproduct. The fame and money. None of which were particularly important to me. Even as I look back, I realise how unimportant it was to me." During this time, Mike was working 12+ hours a day and Phyllis stayed home to watch Christian and keep their huge mansion in the Hollywood Hills under control. In the 60s, to Monkees fans who read magazines like "16" and "Tiger Beat", Phyllis was considered an ideal mother to Christian and an ideal wife to Mike. The magazines devoted entire stories to Phyllis and her being a Perfect Mom, they devoted articles to her beauty secrets, she was features in fashion spreads, and she gave interviews. Teenage girls everywhere didn`t envy Phyllis; they aspired to be like her. She was a role model just because she was the wife of Mike Nesmith.During the whole "Monkee Experience", Phyllis and Mike weren`t into the parties, drugs, and fast paced lifestyle AS MUCH as the other three Monkees, as they had a son to take care of, but they did their share of hanging out with the "in crowd", as Phyllis remarks; "I think probably the neatest thing [about Mike being a Monkee] was that it exposed me to some interesting people. Booted us into an echelon where we met some interesting folks." Phyllis accompanied Mike on his first trip to London where they not only met the Spencer Davis Group and Donovan, they also were personally invited by John and Cynthia Lennon to stay at their home while in England.Phyllis also went to England a second time when the Monkees went on tour their in the Summer of `67. Around this time, she became pregnant for the second time.In late 1967, Phyllis was driving on one of the curvy, narrow streets in the Hollywood Hills and she crashed one of her and Mike`s Mercedes. She was rushed home and put in bed while someone called Mike. When he found out, he told her to rest at home, even though she was gashed and bruised on her head. But as Christian Scientists, Mike and Phyllis both believed that if you got injured, you could not go to the hospital, yo