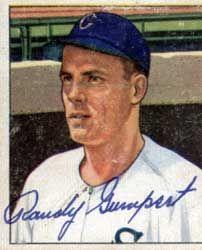 Randall Pennington Gumpert (January 23, 1918 – November 25, 2008) was a Major League Baseball pitcher, playing for five different teams throughout his career. He was born in Monocacy, Pennsylvania. His pro career began when he was signed by the Philadelphia Athletics as a free agent before the 1936 season, at the age of 18. Even before that, he threw batting practice for the Athletics in Shibe Park as far back as 1934 before he was signed to the team. He pitched three seasons of relief in Philadelphia before being traded to the New York Yankees in July 1939.