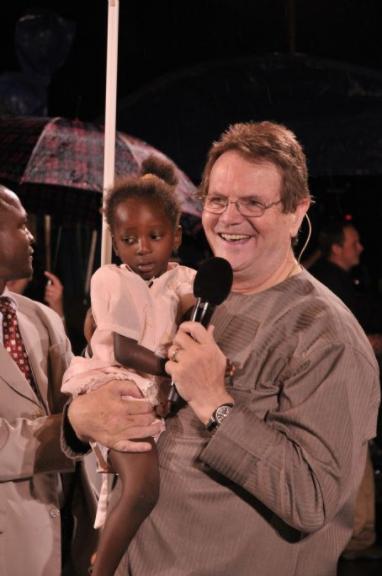 Reinhard Willi Gottfried Bonnke is a German Pentecostal evangelist, principally known for his gospel missions throughout Africa. Bonnke has been an evangelist and missionary in Africa since 1967.
In 1991, during Bonnke's visit to Kano in Nigeria, there were riots in the city as Muslims protested over remarks he had reportedly made about Islam in the city of Kaduna on his way to Kano. A rumor was spread that Bonnke was planning to "lead an invasion" into Kano. Muslim youths gathered at the Kofar Mata Eide-ground where they were addressed by several clerics who claimed that Bonnke was going to blaspheme Islam. About 8,000 youths gathered at the Emir's palace and after noon prayers the riots ensued, during which many Christians sustained various injuries and several churches were burned. After nine years he returned to Nigeria to preach.

After graduating from the Bible College of Wales and returning to Germany, Bonnke led a series of meetings in Rendsburg. He began receiving speaking invitations from all around Germany and the rest of the world. Bonnke met Anni Suelze at a gospel music festival, and admired the grace with which she recovered from a wrongly pitched music performance at the expense of losing the competition. He offered to preach at the church she attended one Sunday and fell in love with her. They married in 1964 and had three children.
Bonnke died on December 7, 2019, surrounded by his family according to a statement signed by his wife.In November 2019, he had undergone femur surgery.