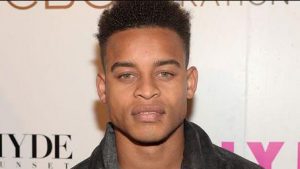 Robert is alive and kicking and is currently 39 years old.
Please ignore rumors and hoaxes.
If you have any unfortunate news that this page should be update with, please let us know using this .

Does Robert Ri'chard Have the coronavirus?

Beverly's information is not available now.

Robert Andrew Ri'chard is an American television and film actor. He has starred in the Nickelodeon sitcom Cousin Skeeter. He also made a few appearances as himself on the hit Nickelodeon game show, Figure It Out. He played Samuel on Touched By An Angel, a troubled teen who is in prison for shooting a man. Also, he has appeared in films such as Coach Carter and House of Wax. His breakout role was in the TV adaptation of Anne Rice's novel, The Feast of All Saints, where he played the young Marcel who becomes a man within society. He has been professionally acting since the age of 13. He appeared in the movie Light It Up along with R&B star Usher. He attended Palms Middle School in Los Angeles, California.
Ri'chard has guest starred on many hit shows such as Boston Public, Touched by an Angel, CSI: Miami, My Wife and Kids, and The Jamie Foxx Show. In 2000 he starred in the Disney Channel TV movie Alley Cats Strike. Ri'chard has appeared in the 2006 season of Veronica Mars. In 1997, Ri'chard starred in the television special, In His Father's Shoes, which earned him the 1998 Daytime Emmy Award for Outstanding Performer in a Children's Special. He became popular in 2001 when he got the role of Arnez Ballard on the UPN hit sitcom One on One alongside Flex Alexander and Kyla Pratt. That role was the most significant of his television roles. He continued to play the role until the show ended in 2006.

In the sitcom Meet the Browns, he portrayed Derek Porter, a buffoonish frat student who lived next door to Brown Meadows. He often provided service to Brown Meadows, and was often either the mastermind or participant in Brown's antics. He debuted in Season 3 as a recurring character, and in the fourth season, was promoted to a main character.
Ri'chard was set to star in a new series entitled Eight Days a Week, starring Christina Milian and Mario Lopez on the CW Television Network during the Fall 2007 season, but it was canceled due to the 2007 Writers Strike before airing. On November 16, 2011, it was announced that Robert Ri'chard was cast as Jamie in the TV series The Vampire Diaries.