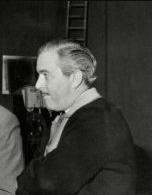 Robert Sidney Baker (17 October 1916 – 30 September 2009) was a British film and television producer, who at times was also a cinematographer and director. Born in London and serving as an artillery man in the British Army, posted to North Africa where he became involved in the army's film and photographic unit, later serving as a combat cameraman in Europe.

Tags: Born in 1916 British Died in 2009 Film and television producer