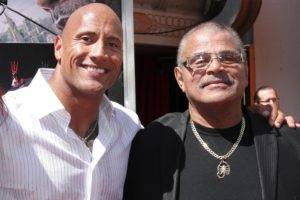 Rocky Johnson (born Wayde Douglas Bowles; August 24, 1944) is a retired Canadian professional wrestler. During his wrestling career, he became a National Wrestling Alliance (NWA) Georgia Champion and a NWA Southern Heavyweight Memphis Champion, as well as winning many other championships. Along with his partner Tony Atlas, Johnson was a part of the first black tag team to win the World Tag Team championship in the World Wrestling Federation (WWF).
Johnson recounts in his autobiography Soulman that he met his first wife Una Sparks at a dance while he was training to become a boxer. Una was from Cherrybrook, Nova Scotia and a devout Jehovah's Witness. They had two children, Curtis and Wanda, whom he introduced at his 2008 Hall of Fame induction. While married to Una, he became romantically-involved with Ata Maivia, daughter of wrestling legend "High Chief" Peter Maivia.

Ata met Rocky after Maivia and Johnson were tag team partners in a match on the independent circuit. Maivia disapproved of the relationship—not because of anything personal against Johnson, but because of his chosen profession, as he knew first hand how hard it was for wrestlers' families who were at home while they were constantly on the road. Their son Dwayne was born May 2, 1972. In order to provide for his two families, he adopted a frugal lifestyle while on the road, subsisting on beer, sliced cheese, and bologna, "and unlike most of the other boys, I wasn't a partier".
He doesn't reveal if Una knew about Ata and Dwayne, but states that she gave him an ultimatum to quit wrestling or "we would have to go our separate ways" as Jehovah's Witnesses "didn't believe in blood sport". Johnson states that he and Una parted amicably, and "we're good friends". He obtained a divorce in Texas, then filed for a marriage license in Florida a few days later on December 21, 1978 to marry Ata; they divorced in 2003. He was married to a speech pathologist named Sheila at the time of his death.