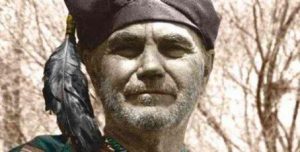 Rolling passed away in 1997 at the age of 81 in Nevada (just east of the town of Carlin) that they named Meta Tantay. Rolling's cause of death was diabetes.

Rolling Thunder (birth name: John Pope; 1916–1997) was a hippie spiritual leader, a non-Native who self-identified as a Native American medicine man. He was raised in Oklahoma and later moved to Nevada.