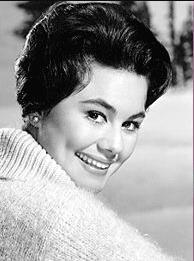 Sharon passed away on July 3, 1996 at the age of 52 in Lake Arrowhead, California, USA. Sharon's cause of death was cancer.

Sharon Hugueny (February 29, 1944 — July 3, 1996) was an American actress who had a brief film and television career during the 1960s, appearing in nineteen TV episodes and four feature films. The last gave her a co-starring role alongside Peter Fonda in 1964 as one of the title characters in The Young Lovers. Other than a single TV guest shot, she had been away from the cameras for nearly a decade, when an attempted return to filmmaking was cut short by a crippling automobile accident in 1977.
In April 1968, at the age of 24, Sharon Hugueny was married in Santa Barbara to 21-year-old freelance photographer Raymond A. Ross and, in December, they become parents of a son. The marriage ended in 1974, but sources are unclear whether she was divorced or widowed. Five months into her marriage, she was seen in a one-minute guest shot on the September 18, 1968 episode of ABC's popular primetime soap, Peyton Place, playing Donna Franklin, a glamorous and sophisticated mystery woman whose appearance in a restaurant with an older, divorced businessman (Joe Maross), upsets his teenage daughter (Elizabeth Walker) who is having dinner there with her mother (Barbara Rush) and the mother's social companion, Dr. Michael Rossi (Ed Nelson).

Despite the brevity of her role and billing at the bottom of the episode's cast list, the character was mentioned in a few subsequent installments of the serial and seemed to have a potential of becoming a semi-regular, but did not appear again, other than for a fleeting, unbilled, sighting in the December 11 episode. Hugueny's impending motherhood that month may have contributed in putting an end to any future plans of developing the Donna Franklin storyline. After a passage of six years, in the last days of 1974, the year of her divorce/widowhood, she made one final passage in front of the cameras, as a guest star in "Choice of Victims", the December 22 episode of the hour-long detective series, Mannix.
Less than two years later, on April 16, 1976, in Kentucky's Jefferson County, Hugueny, age 32, married 45-year-old writer and founder of Mid America Pictures, Gordon Cornell Layne. The following year, deciding to return to acting, she acquired new management and was en route to sign performing contracts when she was badly injured by a police vehicle engaged in a high-speed pursuit. Attended by her husband at their home in the San Bernardino Mountains resort community of Lake Arrowhead, she partially recovered and lived for nineteen more years, until succumbing to cancer at age 52.