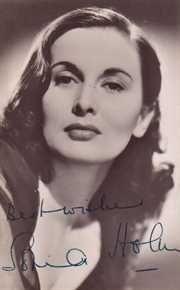 The Bad Lord Byron is a 1949 British historical drama film centered on the life of Lord Byron. It was directed by David MacDonald and starred Dennis Price as Byron with Mai Zetterling, Linden Travers and Joan Greenwood.
She was married to Patrick Holt. She died on July 2, 1974 in Oxford, England.