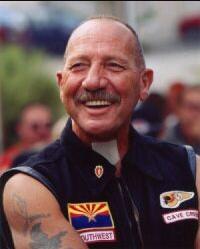 Sonny is alive and kicking and is currently 83 years old.
Please ignore rumors and hoaxes.
If you have any unfortunate news that this page should be update with, please let us know using this .

Ralph Hubert "Sonny" Barger (born October 8, 1938) is a founding member (1957) of the Oakland, California, U.S. chapter of the Hells Angels Motorcycle Club. He is also the author of five books - Hell's Angel: The Life and Times of Sonny Barger and the Hell's Angels Motorcycle Club (2000), Dead in 5 Heartbeats (2004), Freedom: Credos from the Road (2005), 6 Chambers, 1 Bullet (2006), and Let's Ride: Sonny Barger's Guide to Motorcycling (2010) - and editor of the book Ridin' High, Livin' Free: Hell-Raising Motorcycle Stories (2003).
Onscreen, Barger was identified but didn't speak in Hells Angels on Wheels (1967) and was one of several members of the Angels who had speaking parts playing themselves in Hell's Angels '69 (1969); he has appeared in several additional films. He also appeared in the Sons of Anarchy television show as "Lenny "The Pimp" Janowitz", who ends up being the last living member of SAMCRO's "First 9".

Sonny Barger remains an active member of the Hells Angels in the Phoenix Arizona Chapter, having moved there from Oakland in 1998. He has owned 10 to 12 motorcycles throughout his life.
In recent years, Barger has worked to promote motorcycle safety; he co-authored a book on the subject with Darwin Holmstrom (the author of The Complete Idiot's Guide to Motorcycles (1998)) titled Let's Ride: Sonny Barger's Guide to Motorcycling (2010).