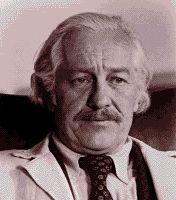 Strother passed away on August 1, 1980 at the age of 61 in Thousand Oaks, CA, USA. Strother's cause of death was heart attack.

Biography by Hal Erickson [-]A graduate of the University of Michigan, Strother Martin was the National Junior Springboard Diving Champion when he came to Hollywood as a swimming coach in the late 1940s. He stuck around Lala-land to play a few movie bits and extra roles before finally receiving a role of substance in The Asphalt Jungle (1950). Lean and limber in his early day, Martin was frequently cast in parts which called upon his athletic prowess (e.g. a drawling big-league ball player in 1951's Rhubarb). As his face grew more pocked and his body more paunched with each advancing year, Martin put his reedy, whiny voice and sinister squint to excellent use as a villain, most often in westerns. It took him nearly 20 years to matriculate from character actor to character star. In 1967, Martin skyrocketed to fame as the sadistic prison-farm captain in Cool Hand Luke: his character's signature line, "What we have here is a failure t' communicate," became a national catchphrase. While he continued accepting secondary roles for the rest of his career, Martin was awarded top billing in two sleazy but likeable programmers, Brotherhood of Satan (1971) and Ssssssss (1973). A veteran of scores of television shows, Strother Martin was seen on a weekly basis as Aaron Donager in Hotel De Paree (1959) and as star Jimmy Stewart's country cousin in Hawkins (1973).