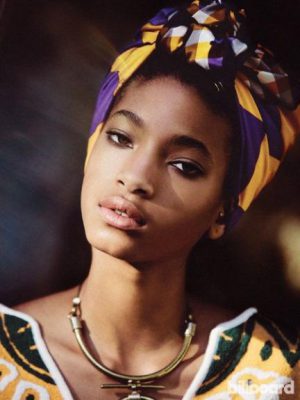 Willow is alive and kicking and is currently 21 years old.
Please ignore rumors and hoaxes.
If you have any unfortunate news that this page should be update with, please let us know using this .

Does Willow Smith Have the coronavirus?

Is Willow Smith's father, Will Smith, dead or alive?

Willow Smith's father, Will Smith, is still alive and kicking at the age of 53. He is American and has had a career as a actor.

Willow Smith's mother, Jada Pinkett Smith, is still alive and kicking at the age of 50. She is American and has had a career as a actress.

Willow Camille Reign Smith, known professionally as Willow, is an American singer, actress and dancer. She is the daughter of Will Smith and Jada Pinkett Smith, the younger sister of Jaden Smith and the half-sister of Willard Carroll "Trey" Smith III. Smith made her acting debut in 2007 in the film I Am Legend and later appeared in Kit Kittredge: An American Girl alongside Abigail Breslin. She received a Young Artist Award for her performance.
Smith made her acting debut in I Am Legend alongside her father. Her next film, Kit Kittredge: An American Girl, was released on July 2, 2008. In 2008, she voiced the character of young Gloria in Madagascar: Escape 2 Africa, alongside her mother as older Gloria.

In June 2009, Smith's mother Jada Pinkett Smith announced in an interview on Lopez Tonight that Smith would be releasing an album. Smith then released her first single, "Whip My Hair", which went platinum in the US and peaked at number 11. In the UK the single peaked at number two. Smith soon after announced her next single, "21st Century Girl". After she performed the song on The Oprah Winfrey Show, she released it the next day on February 3, 2011. The video was released March 9, 2011. On January 20, 2011, Will Smith announced he was planning to produce a contemporary remake of the Broadway musical Annie starring Smith in the title role. However, Smith was deemed too old and the title role was given to Quvenzhané Wallis in February 2013.
On her birthday, October 31, 2017, she released her second album The 1st which is praised for its musical development, particularly Willow's ability to create music following her 1990s R&B predecessors, despite not having been alive during the time. She toured the album with Jhene Aiko alongside St. Beauty, Kodie Shane, and Kitty Cash through the end of 2017.