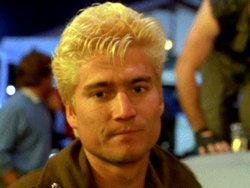 Bernie passed away on June 5, 1996 at the age of 33 in Los Angeles, California, USA. Bernie's cause of death was aids.

Bernie Pock's mother, Nancy Kwan, is still alive and kicking at the age of 83. She is American and has had a career as a actress.

Bernie Pock, son of actress Nancy Kwan, had many film credits, primarily as a stunt actor. Bernie Pock was born on March 28, 1963 in Innsbruck, Austria as Bernhard Peter Pock. He is known for his work on Star Trek: Generations (1994), Die Hard (1988) and Back to the Future (1985).
Born as Bernhard Peter Pock in Innsbruck, Austria, Europe in 1963, he was the son of actress Nancy Kwan and Austrian hotelier Peter Pock. Pock was born in Austria where his mother and father had opened a ski resort, but the marriage did not last long and the couple divorced in 1968. Kwan moved back to Hollywood where she had a two year marriage with Pock's stepfather writer and producer David Giler.

He was married to Debra Jane Lasley. Pock met Debra Jane Lasley in 1990 and married her in 1992. Both unaware she had AIDS, he contracted HIV from her; she died of the disease shortly after they were married. Bernie died of AIDS at the age of just 33 in Los Angeles, California, USA. Bernie's mother Nancy published a book in 1997 entitled Celebration of a Life - Memories of My Son.