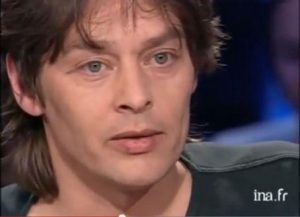 Christian is alive and kicking and is currently 59 years old.
Please ignore rumors and hoaxes.
If you have any unfortunate news that this page should be update with, please let us know using this .

Does Christian Aaron Boulogne Have the coronavirus?

Christian Aaron Boulogne's mother, Nico, died on July 18, 1988 as she was 49 years old. Her cause of death was cerebral hemorrhage (due to a biking accident).

In 1962, Nico gave birth to a child, Christian Aaron Boulogne and claimed that the father was Alain Delon, although Delon denied he was the father. Nico's son Ari, as he was nicknamed, would later appear with his mother in The Chelsea Girls.
At the time of Ari's birth, Delon denied paternity. A French civil servant, Jean-Marc Billancourt, maintains that he is the real father of Ari and has issued an appeal to Ari on the internet: "... Nature made me the almost perfect double of Alain Delon which came in handy with women... At one time, I benefited from it. It's thus that I met the singer Nico, with whom I had an affair. She was convinced that I was the real Delon and when she told me she was pregnant, I told her my true identity. But she never wanted to believe me. One day she disappeared without leaving an address - which suited me given that I was already married and had a family. When I saw a certain Ari Boulogne at the home of Mireille Dumas, something clicked, and my last doubts disappeared when I saw a photo of his mother in the press. It was, indeed, her! When I tell this story nobody wants to believe me and my friends, mocking me, call me Boulogne-Billancourt. Ari, if you are reading these lines, I am not annoyed if you do not believe me either. The heritage of Alain Delon is, without doubt, more interesting than that of the simple civil servant that I am. As for you, Mr. Delon, something tells me that you will not doubt for an instant the truth of my claim.

However, when Delon's own mother, Edith Boulogne, saw Ari's photograph in a French newspaper, she was convinced it was her son's child: "I said to myself, that's my son's child. We went to see [Nico] and the baby. The kid was about two years old. He came running into my husband's arms. We were so moved. I saw my own son in him. And I truly believed that my son would accept him... When he heard about it two years after we had taken the baby, he had his agent tell me that I had to choose between the baby and my son. My husband said, 'Your son can feed himself, but Ari can't raise himself.' So we kept him. Think about it, he was so little. Before we took him, [Nico] dragged him around everywhere. He ate nothing but french fries, in train stations, hotels, airports. They lived like bohemians. She came to see him once in three years. She brought him something from America. Guess what? An orange. My husband and I looked at each other, speechless. We took the orange and thought, she's really not like other people... but I still liked her. She was the most beautiful woman I had ever seen.
"Alain Delon's mother ended up adopting Ari, giving him the last name of Boulogne. Ari became Warhol's youngest star when he later appeared with his Nico in The Chelsea Girls in 1966. When he grew up he became a heroin addict - turned on to the drug by Nico who was also addicted to it - and spent his life in and out of clinics and psychiatric hospitals. In 2001 while living in Paris, he published a book about himself and Nico called L'Amour N'Oublie Jamais. His decision to write the book coincided with the birth of his own son.