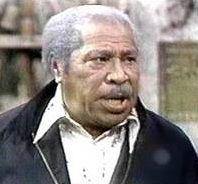 Donald Thomas Bexley (March 10, 1910 – April 15, 1997) was an American actor and comedian, best known for playing Fred Sanford (Redd Foxx)'s friend Bubba Bexley on the 1970s television sitcom Sanford and Son.
When Bexley returned from Europe in 1969, he and Foxx were cast together in Cotton Comes to Harlem (1970). Upon Bexley's arrival from Asia in 1971, Foxx sent for him to join in the NBC sitcom Sanford and Son. It was Foxx who convinced Bud Yorkin and Aaron Ruben to hire Bexley to play one of Fred G. Sanford's friends. At the time, Bexley was 62 years old and had never appeared on television before. Bexley gained international popularity for his portrayal as "Bubba" on the series, which is a very successful "rerun sitcom" even today.

Sanford and Son was an instant hit and remained in the country's top 10 programs for its entire run from 1972 to 1977. Bexley reprised Bubba in the short-lived sequel, Sanford Arms, which had many of the same characters but not Foxx and Demond Wilson.
Bexley lived much of his life in Los Angeles, but after injuring his hip, moved to Hampton, Virginia, in 1996 to live with a friend, who served as his caregiver. Bexley died of heart and kidney failure on April 15, 1997, at Hampton Sentara Hospital. He was 87 years old. He is survived by his wife Sally Bexley, daughters Donna and Stacies Marie, grandchildren, great-grandchildren, nieces, and nephews.