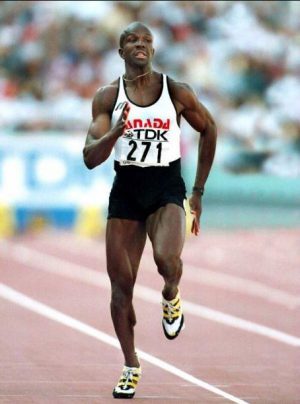 Donovan is alive and kicking and is currently 54 years old.
Please ignore rumors and hoaxes.
If you have any unfortunate news that this page should be update with, please let us know using this .

Donovan Bailey (born December 16, 1967) is a retired Canadian sprinter, who once held the world record for the 100 metres race following his gold medal performance in the 1996 Olympic Games. He was the first Canadian to legally break the 10-second barrier in the 100 m. Particularly noted for his top speed, Bailey ran 27.07 mph (12.10 m/s) in his 1996 Olympic title run, the fastest ever recorded at the time. In 2005, Donovan Bailey was inducted into the Ontario Sports Hall of Fame.
In May 1997 he raced against Michael Johnson in a 150 m race at Toronto's SkyDome in a bid to truly determine who the world's fastest man was. Earlier in the spring of 1997, Johnson began performing television promotions in which he billed himself as "the world's fastest man" as a result of his 200 meters world record, despite the fact that the 100 m world record holders are traditionally given that unofficial title. Though Bailey ran in the competition, he initially refused to take part, stating that "the world's fastest man was decided in Atlanta." Bailey won with a time of 14.99 seconds and received $1.5 million.

Bailey is a divorced father of two, a girl named Adriene Bailey and one boy, Mateus Bailey and has four brothers — Glenroy, Wilburn, O'Neil and Michael. Along with one sister Arlene Duncan. His father is African American and his mother is West Indian.