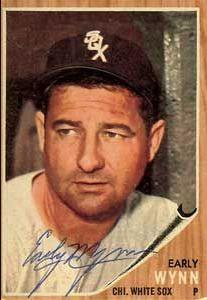 Early Wynn Jr. (January 6, 1920 – April 4, 1999), nicknamed "Gus", was an American Major League Baseball (MLB) right-handed pitcher. He pitched for the Washington Senators, Cleveland Indians, and Chicago White Sox during his 23-year major league career. He was identified as one of the most intimidating pitchers in the game with his powerful fastball combined with a hard attitude towards batters. Wynn was inducted into the Baseball Hall of Fame in 1972.