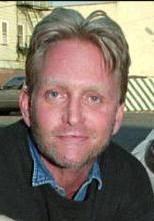 Eric passed away on July 6, 2004 at the age of 46 in Manhattan, New York City, New York, USA. Eric's cause of death was drug overdose.

Eric Anthony Douglas (June 21, 1958 – July 6, 2004) was an American actor and stand-up comedian. Douglas was the youngest son of actor Kirk Douglas and his second wife Anne Buydens. One of his half-siblings was Academy Award-winning actor and producer Michael Douglas.
Douglas made his screen debut in 1971 in A Gunfight, starring his father and Johnny Cash. In 1982, Douglas appeared in the NBC television film Remembrance of Love, also starring his father. Douglas portrayed a younger version of his father's character in flashback scenes. He appeared in several films in the 1980s including The Flamingo Kid (1985), Tomboy (1985), The Golden Child (1986), and Honor Bound (1988). In the late 1980s, Douglas performed off-Broadway at the Village Gate Theater with the critically acclaimed improvisational comedy troupe Noo Yawk Tawk . He also appeared in a production of Dale Wasserman's Shakespeare and The Indians at the Music Theatre Conference for the Eugene O' Neill Theatre Center in 1981. Also in the production was folk performer Bobby Bridger, but the production never made it to Broadway.

In 2000, Douglas revealed in an interview that he went into an eight-day coma in 1999 after accidentally overdosing on Xanax. Douglas recalled, "I was in L.A. sitting around my breakfast table with my dad and I choked on a piece of sausage. But because the pills had taken effect, I was not able to dislodge the sausage from my throat." After the Douglases' maid attempted the Heimlich maneuver, Douglas was taken to Cedars-Sinai Medical Center where he fell into a coma. Due to an anoxic brain injury, his speech became slurred and his gait was altered.
On July 6, 2004, a maid found Douglas's body in his Manhattan apartment. An autopsy and toxicology report later determined that his death was caused by "acute intoxication" from the combined effects of alcohol, tranquilizers and painkillers. Douglas's death was ruled accidental. Douglas is interred in the Westwood Village Memorial Park Cemetery, Westwood, Los Angeles, California.