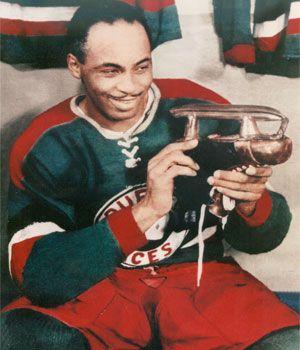 Herbert Henry "Herb" Carnegie, CM, O.Ont, OMC (November 8, 1919 – March 9, 2012) was a Canadian ice hockey player. He was born in Toronto, Ontario to Jamaican parents. He played professional hockey at a time when there was racial discrimination in the NHL that prevented him from playing for the New York Rangers in the 1948-49 season. After his professional hockey career was over, he became a successful businessman working in the investment industry. In 1954, he founded one of Canada's first hockey schools, Future Aces, and through his work in training young hockey players, became a member of both the Order of Ontario and the country's highest civilian award, the Order of Canada. His hockey career was recognized when he was inducted into Canada's Sports Hall of Fame in 2001, and the Ontario Sports Hall of Fame in 2014. He died in Toronto in March 2012 at age 92.