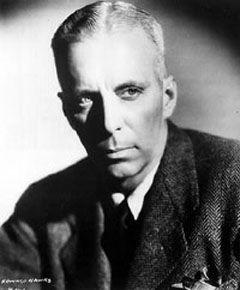 Howard Winchester Hawks was an American film director, producer and screenwriter of the classic Hollywood era. Critic Leonard Maltin labeled Hawks "the greatest American director who is not a household name," noting that, "while his work may not be as well known as Ford, Welles, or DeMille, he is no less a talented filmmaker". He has influenced some of the most popular and respected directors such as Martin Scorsese, Robert Altman, John Carpenter, and Quentin Tarantino. His work is admired by many notable directors including Peter Bogdanovich, François Truffaut, Michael Mann and Jacques Rivette. He is popular for his films from a wide range of genres such as Scarface, Bringing Up Baby (1938), Only Angels Have Wings (1939), His Girl Friday (1940), Sergeant York (1941), To Have and Have Not (1944), The Big Sleep (1946), Red River (1948), The Thing from Another World (1951), Monkey Business (1952), Gentlemen Prefer Blondes (1953), and Rio Bravo (1959).