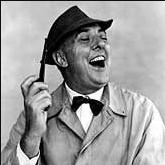 Jacques passed away on November 4, 1982 at the age of 75 in Paris, France. Jacques's cause of death was pneumonia.

Jacques Tati (born Jacques Tatischeff, 9 October 1907 in Le Pecq, Yvelines, France – died 5 November 1982) was a French filmmaker, actor, and screenwriter. Throughout his long career, he worked as a comic actor, writer, and director. In a poll conducted by Entertainment Weekly of the Greatest Movie Directors, Tati was voted the 46th greatest of all time. With only six feature-length films to his credit as director, he directed fewer films than any other director on this list of 50.