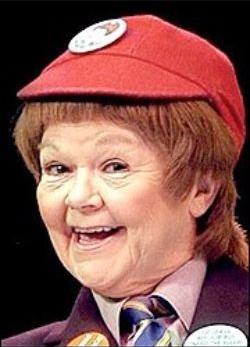 Janette is alive and kicking and is currently 75 years old.
Please ignore rumors and hoaxes.
If you have any unfortunate news that this page should be update with, please let us know using this .

Janette Krankie was born on May 16, 1947 in Queenzieburn, Stirlingshire, Scotland. She is an actress, known for TV's Funniest Music Moments (2008), Glasgow: Big Night Out (2014) and The Krankies Klub (1982). She has been married to Ian Tough since 1969.
She is most well-known for portraying schoolboy Jimmy Krankie, a character she has frequently reprised in assorted TV shows. Semi-retired in December 2004, she fractured her skull and collarbone falling from scenery during a pantomime at Glasgow's Pavilion Theatre. Co-star Gary Hollywood suffered concussion.

She appeared with Ian Tough as The Krankies in the video for the Comic Relief charity single of "I'm Gonna Be (500 Miles)". [March 2007] Embarking on the "Best of British Variety Tour 2008" with Tommy Cannon and Bobby Ball, Paul Daniels, Frank Carson, Jimmy Cricket and Brotherhood of Man. [June 2008]