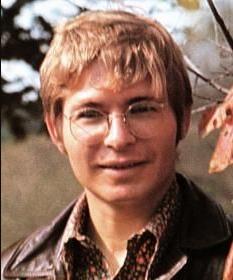 John passed away on October 12, 1997 at the age of 53 in Pacific Grove, California. John's cause of death was accident plane crash.

Henry John Deutschendorf, Jr. (December 31, 1943 – October 12, 1997), known professionally as John Denver, was an American singer-songwriter, actor, activist and humanitarian, whose greatest commercial success was as a solo singer, starting in the 1970s. He was one of the most popular acoustic artists of the decade and one of its best-selling artists. By 1974, he was firmly established as America's best-selling performer, and AllMusic has described Denver as "among the most beloved entertainers of his era". After traveling and living in numerous locations while growing up in his military family, Denver began his music career in folk music groups in the late 1960s. Throughout his life, Denver recorded and released approximately 300 songs, about 200 of which he composed, with total sales of over 33 million.
Denver's first marriage was to Annie Martell of St. Peter, Minnesota. She was the subject of his hit "Annie's Song", which he composed in only ten minutes as he sat on a Colorado ski lift after the couple had had an argument. They lived in Edina, Minnesota, from 1968 to 1971. Following the success of "Rocky Mountain High," inspired by a camping trip with Annie and some friends, Denver purchased a residence in Aspen, Colorado. He lived in Aspen continuously until his death. The Denvers adopted a boy, Zachary John, and a girl, Anna Kate, whom Denver said were "meant to be" theirs. Denver once said, "I'll tell you the best thing about me. I'm some guy's dad; I'm some little gal's dad. When I die, Zachary John and Anna Kate's father, boy, that's enough for me to be remembered by. That's more than enough". Zachary was the subject of "A Baby Just Like You", a song that included the line "Merry Christmas, little Zachary" and which he wrote for Frank Sinatra. Denver and Martell divorced in 1982. In a 1983 interview shown in the documentary John Denver: Country Boy (2013), Denver said that career demands drove them apart; Anne said that they were too young and immature to deal with John's sudden success. The ensuing property settlement caused Denver to become so enraged, he nearly choked Martell, then used a chainsaw to cut their marital bed in half.

Denver married Australian actress Cassandra Delaney in 1988, after a two-year courtship. Settling at Denver's home in Aspen, the couple had a daughter, Jesse Belle. Denver and Delaney separated in 1991 and divorced in 1993. Of his second marriage, Denver later recalled that "before our short-lived marriage ended in divorce, she managed to make a fool of me from one end of the valley to the other".
Denver died on October 12, 1997, when his experimental Rutan Long-EZ plane, aircraft registration number N555JD, crashed into Monterey Bay near Pacific Grove, California, while making a series of touch-and-go landings at the nearby Monterey Peninsula Airport. He was the only occupant of the aircraft. Identification was not possible using dental records so only his fingerprints confirmed the pilot was Denver. The official cause of death was multiple blunt force trauma resulting from the crash.