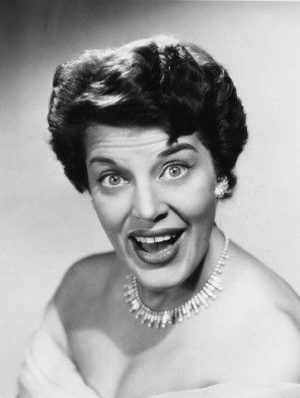 Kaye Ballard (born November 20, 1925) is an American musical theatre and television actress, comedienne and singer. Ballard was born Catherine Gloria Balotta in Cleveland, Ohio, one of four children born to Italian immigrant parents, Lena (née Nacarato) and Vincenzo (later Vincent James) Balotta. Her siblings are Orlando, Jean, and Rosalie.
Ballard established herself as a musical comedian in the 1940s, joining the Spike Jones touring revue of entertainers. Capable of playing broad physical comedy as well as stand-up dialogue routines, she became familiar in television and stage productions. A phrase her mother had used when Kaye was a child, "Good luck with your MOUTH!", became her catchphrase in her sketches and on television. Ballard made her television debut on Henry Morgan's Great Talent Hunt,a short-lived NBC program hosted by Henry Morgan which first aired January 26, 1951. In 1954, she was the first person to record the song "Fly Me to the Moon".

In December 2010, she, Donna McKechnie and Liliane Montevecchi starred in a Santa Fe production of From Broadway with Love, staged at the Lensic Theater.
Ballard was in the 2012 cabaret show Doin' It for Love, which premiered in Austin, Texas, at the historic Paramount Theatre. Starring Ballard and Montevecchi, the cast included Broadway dancer Lee Roy Reams. (The Austin performance benefited the Texas Humane Legislation Network.). The show then went on to play in Los Angeles on March 8th and 10th of 2012. Ballard announced her official retirement in 2015 at the age of 89.