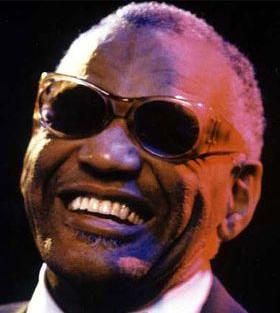 Ray passed away on June 10, 2004 at the age of 73 in Beverly Hills, Los Angeles, California, United States. Ray's cause of death was acute liver failure.

A tragic fate may have given this visionary a heightened sensitivity, perception, awareness, even expansion to his obvious musical gifts that he may have never touched upon had he not suffered from his physical affliction. Whatever it was, Ray Charles revolutionized American music and was catapulted to legendary status by the time he died in Beverly Hills at age 73. Born to Aretha and Baily Robinson, an impoverished Albany, Georgia, family that moved to Greenville, Florida while he was still an infant. It was not a cause for joy and celebration. His father soon abandoned the family and his baby brother, George Robinson, drowned in a freak washtub accident. Ray himself developed glaucoma at the age of five and within two years had lost his sight completely.
A singer in a Baptist choir, he developed a love and feel for rhythms and studied music at the State School for Deaf and Blind Children, showing which brought out his talent and ear for playing various instruments, including the piano and clarinet. An orphan by his early teens, Ray joined a country band at age 16 called The Florida Playboys. He moved to Seattle in 1948 where he and Southern guitarist Gossady McGee formed the McSon Trio. With an emphasis on easy-styled jazz, Ray also played in bebop sessions on the sly. He departed from the McSon Trio and signed with Los Angeles-based Swing Time Records, becoming the pianist for rhythm and blues great Lowell Fulson and his band. Atlantic Records eventually picked him up. Along the road he would add composer, writer and arranger to his formidable list of talents.Ray's first R&B hit was "Confession Blues" in Los Angeles in 1949. In 1951, he had his first solo chart buster with "Baby Let Me Hold Your Hand".

His amazing versatility and raw, soulful delivery quickly caught on with audiences and helped put Atlantic Records on the map. Hits like "Mess Around", "Things I Used to Do", "A Fool for You", "I've Got a Woman", "Drown in My Own Tears", and especially "What'd I Say" in 1959, pushed gospel and R&B to a wider crossover audience. He made a move into the country music arena--unheard of for a black singer--in the 1960s, doing soulful spins on Hank Williams and Eddy Arnold tunes. In 1960, he left Atlantic and signed with ABC-Paramount. Under ABC-Paramount, hits poured out during this peak time with "I Can't Stop Loving You", "Hit the Road Jack", "Busted" and his beloved signature song "Georgia On My Mind".His landmark 1962 album "Modern Sounds in Country and Western Music" brought a new swinging style to country music. From there, he traveled a mainstream route--from interpreting songs from The Beatles ("Eleanor Rigby") to appearing in "Diet Pepsi" ads ("You Got the Right One, Baby, Uh-huh!"). He also showed up sporadically in films, playing himself in the movie Ballad in Blue (1965) and guest-starring in The Blues Brothers (1980) with Dan Aykroyd and John Belushi.
A television musical variety favorite with his trademark dark sunglasses and dry humor, he worked alongside such musical legends as Ella Fitzgerald and Barbra Streisand on their very special evenings of song.It is hard to believe that with everything he accomplished, Ray also had to deal with a longstanding heroin problem. In the mid-1960s, he was arrested for possession of heroin and marijuana and revealed that he had been addicted for nearly two decades. By 1965, he had completely recovered.
The man who lived life on the edge was divorced twice and had 12 children both in and outside his marriages. At the time of his death from liver disease in 2004, he was working on a recording project of duets with such performers as Willie Nelson, Bonnie Raitt, B.B. King, Elton John and Norah Jones. This collaboration entitled "Genius Loves Company" led to an incisive win at the Grammy Awards--eight posthumous trophies including "Album of the Year" and "Record of the Year".