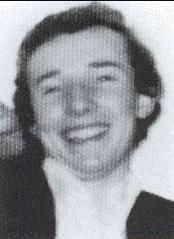 Raymond passed away on May 21, 1981 at the age of 24 in H block of Maze prison (aka Long Kesh), County Down, Northern Ireland. Raymond's cause of death was hunger strike.

Raymond McCreesh (Irish: Réamonn Mac Raois, 25 February 1957 – 21 May 1981) was a volunteer in the South Armagh Brigade of the Provisional Irish Republican Army (IRA). In 1976 he and two other IRA volunteers were captured while attempting to ambush a British Army observation post. McCreesh was one of ten Irish republicans who died on hunger strike in the Maze Prison.