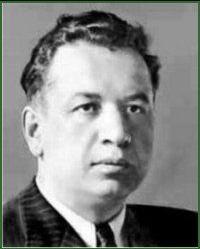 Sergei Nikiforovich Kruglov (Russian: Серге́й Ники́форович Кругло́в) (October 2, 1907 – June 6, 1977) was the Minister of Internal Affairs of the Soviet Union from December 1945 to March 1953 and again from June 1953 until January 1956. He held the military rank of Colonel General. Kruglov was a person of excellent education, and was known for his mild temper and generosity to his staff; nevertheless, he was involved in several brutal actions of the Soviet security forces, including the deportations of several ethnic groups such as Chechens and Ingushes. These actions occurred in the 1940s and were carried out alongside his comrade-in-arms General Ivan Serov.