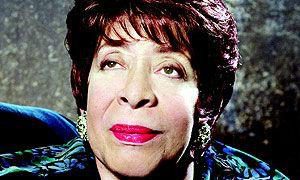 Shirley passed away on October 20, 2005 at the age of 71 in Washington, DC. Shirley's cause of death was complications of diabetes.

Shirley Valerie Horn (May 1, 1934 – October 20, 2005) was an American jazz singer and pianist. She collaborated with many jazz greats including Miles Davis, Dizzy Gillespie, Toots Thielemans, Ron Carter, Carmen McRae, Wynton Marsalis and others. She was most noted for her ability to accompany herself with nearly incomparable independence and ability on the piano while singing, something described by arranger Johnny Mandel as "like having two heads", and for her rich, lush voice, a smoky contralto, which was described by noted producer and arranger Quincy Jones as "like clothing, as she seduces you with her voice". Although she could swing as strongly as any straight-ahead jazz artist, Horn's reputation rode on her exquisite ballad work.